Things I Write When The Night Gets To Me 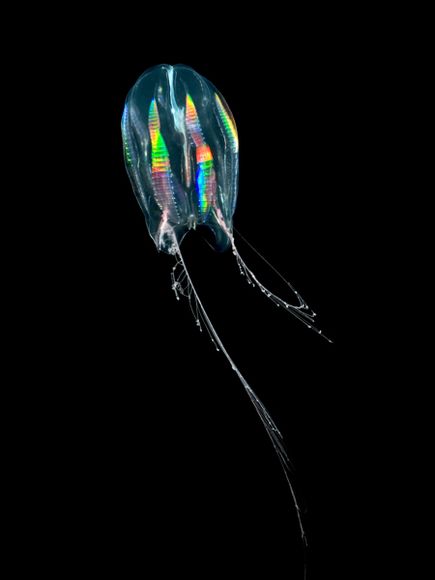 Comb Jelly
Photograph by Ingo Amdt, Minden Pictures
Darkness in Antarctica’s Weddell Sea gives this comb jelly a chance to show off its candy-colored bioluminescent cells.
Things and pictures like this never fail to snap me back to reality where i would quit whining about life. Because, really, the world is sooo huge and there are so much more unexplored and unseen, and i, complaining about A levels and lame things like smelly boys? Ha ha ha yes i actually just mean trivial. This too explains my constant fascination with the world, the ocean, the galaxy, universe, quantum physics (just watched a documentary about it on History Channel MINDBLOWN).
ANYWAY
So yesterday i attended my first ever SSP (Self Study Programme for students who fail to meet the passing criteria) and i spiraled into depression......... IM NOT KIDDING.
OKAY, so how it works is that you fail to meet the criteria during the Term Exams, you get sent to SSP where twice (i'm not sure, it depends??) a week you go to the library plonk your ass down and just sit and study on your own from 4.30pm to 6pm. Just like normal detention. But they are bloody strict about attendance and there's hardly anyway to get out of it. I mean really, i don't mind staying in school to study but its just....
1. going to this shithole is just like getting sent to TAF CLUB. Which by the way spells FAT backwards if you don't already know.
The best recipe for a boost of your morale, oh yay!
2. i hate the school library. It's cold and dry and sucks the life out of me.
3. i know i need to study DUH LOOK AT THE BLOODY RESULTS IM GETTING BUT I JUST DON'T WANNA DO THINGS IN A FORCED MANNER I MEAN YES EDUCATION IN ITSELF IS ALREADY IN A WAY FORCED UPON ALL SINGAPOREANS 5 TO AT LEAST 12 YEARS OLD BUT I KINDA WANNA STUDY ANYWAY ITS JUST NOT UNDER GODDAMN EYES WATCHING OVER ME AND MAKING ME REPORT TO YOU I CAN DO THIS MYSELF!!!!!!!!!! GAHHHHH!!!!!!!!
I have managed to escape this shithole for the past 1 half year in AC by just studying (to be honest not much effort put in but still i manage to scrape through~) until, OK HERE COMES THE BLAMING EVERYTHING ELSE BUT MYSELF PART,
the softball season started. SIGHHHHH.
1. actually during the March term exams i told myself i would at least try my best so that i could go for trainings and be really focused in the March Holidays and I DID IT. I passed every single subject hehe
BUT
2. i was so into training and the season that i just threw everything out of my head for the next few months. This is just me lah okay. I want something so much, i get so much drive that i neglect other aspects. Stabs self. AND I GENUINELY THOUGHT THAT THERE WAS NO SSP FOR MID TERMS.
i know its an excuse bla bla BUT HELL YEAH ITS AN EXCUSE THAT WORKS BECAUSE IT ACTUALLY MAKES ME STUDY. So i went into the exam hall already giving up.
I gave up on my lit essays, out of 2 only completing one which wasn't very coherent anyway and threw away the other. Economics was bad i had the concepts but didn't bother to try. Geography, let's not even go there.
So. Went to the library yesterday and sat myself down trying to be all positive about it.. and i fell asleep for the whole one and a half hour. There was a high chance that i slipped into semi-coma (is there even semi for it) because i was so freaking exhausted. Students are not allowed to sleep during that by the way. Nor go to the washroom.
But really, the depressing part came when i woke up and if i could i would have strangled myself. You know that feeling when you are so angry at yourself? Like how you set your alarm for a nap because you have a bloody paper the next day AND YOUR NAP DEVELOPS INTO A DEEP SLUMBER LASTING FOR 8 HOURS YEZ THAT'S THE FEELING IM TALKING ABOUT.
Ahhhh, but thank God for Jayme and Pradeep who were there afterwards to calm me down. It was a serious panic attack ever since coming back to school after the whole month of June fun.
If not for all my amazing friends who were with me this few weeks of angst and stress, i don't know how i'd snap out of it. Bumping into RachelFong at starbucks on sunday was really awesome. She told me with such conviction, "if you tackle A's like how you train for softball, you're gonna make it huge with that drive, man." or something along those lines. THANK YOU RACHEL I LOVE YOU MUAXXXXX.
BUT HI! IM BACK TO MYSELF FULLY DRIVEN AND HIGHLY MOTIVATED ONCE AGAIN!!!!!!!!!!! (prayers does help a lot, really) AND IM READY TO CONQUER THE WORLD BRING.IT.ON!!!!!!! READY TO SPREAD SOME LURRRRVE AND ENCOURAGEMENTS TOO ^__^ IM NOT KIDDING!!!! IM GOING TO KICK SOME ASS hehehe
If you are reading my tiny ranting entry, and feeling like how i did, really, don't give up right now. It's just 4 more months and think about the freedom after NO ONE CAN BLAME YOU FOR BEING A BUMMER WITH NO GOAL IN LIFE!!! It is not worth it to let all our efforts go down the drain.
Don't stop till its over.
Come find me at the Void Deck, i will convince you that you can do it.
at 1:52 am