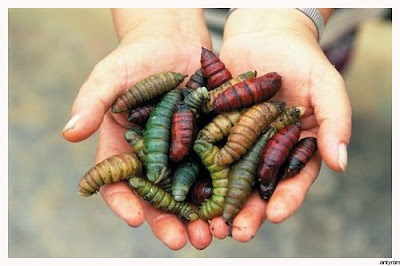 Hi! Would you like some sago worms? High in protein!! :D
I read about them in some side note of geography text hahaaaaaaa

And I didn't know that poland people are called poles until i read one of the maps in history text! Imagine if someone asks you, hi! what do you see in some random carnival of poland? Lots of poles!!!!! hehee....

The news is talking about all the couples registering their marriage today 'cos its 09 09 09 blah blah aiyooooooooo 2 years back my birthday was on 20 07 2007 too not like its pretty much a big deal next year would be 20 10 2010. Sigh, how people sought for entertainment in this crazily urbanized world of singapore. No wonder i have been hearing the slogan, Life sucks, take drugs! thing around.


Im pretty much stressed up too, each time im not with my textbooks, i think of all the things i need to cover, and falling sick after too many nights without proper sleep. Ahhh, without proper sleep, everything just comes, bad skin, headache, flu~~


Kids in Netherlands don't have exams for 7 years in primary school! No wonder studies show that Netherlands children are the happiest in the world. And i don't think they are any less smarter than us. Honestly, do we need to know how to balance chemistry equations in our lives? Do we need to plot a graph to know what veggies to buy at the market? Do we need to know that there's double carbon bonds, C=C, in unsaturated (or is it saturated) organic compounds??

When i was in Brisbane last year for exchange, i got to know that they learn Factorizing in, i can't remember what grade's equivalent to sec3, but so what if they are one year behind us (we learnt that in sec2)? They are people that are more independent ( and yes, you can say its generalizing blah blah...). They move out to stay on their own at prolly 18 or 19 and they see the world in such a broader perspective! Not narrow minded people like us.... Sigh!!!!!!!!!
It's all about culture and the environment we are brought up in. Im studying for o's now because im trying to make my way to university since a certificate from there is the least i should get in order to get a good job and survive in singapore. And with all this pursuing, would anyone slow down and ask themselves, so what if i get that dream job, that dream car, that dream house?? What's after that??


The worst thing is, after making such comments, i too, is still involved in the rat race of society.
at 11:20 pm